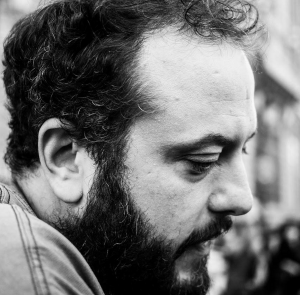 Guillermo Zapata is a spanish screenwriter and film director. He has worked in televisión and New Media since 2003 and directed three Short Films (http://www.imdb.com/name/nm2008051/) and several video-clips. He teachs Screenwritting for tv and transmedia projects in “San Antonio de los Baños’s School” (Cuba) and also in “Lugar Do Cinema” Bello Horizonte Schooll (Brasil) He also writes for several digital newspapers such as “Eldiario” (http://www.eldiario.es/autores/guillermo_zapata/) as a writter and journalist specialiced in transmedia, crossmedia and crowdfunding as well as digital communities.
His last project is a webseries developed with teenagers from 15 to 18 years old with the colaboration of “Fundación Telefónica” and “Telelab”http://telelab.kayrostransmedia.net/seccion/que-es-telelab He is also an active member of Patio Maravillas,a multi-purpose autonomously-governed Space in Madrid. Nowadays, he is one of the spokesman of Ganemos Madrid.